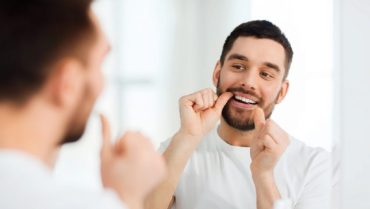 What is it about flossing that makes it so confusing and frustrating? If you’ve been wondering if you’re hurting yourself more than helping your smile, here are some of the most common FAQs asked at Wyndham Dental:

Why does flossing make my gums bleed?

The most common complaint people have about flossing is that it makes their gums bleed or hurt. This usually means that there is a case of gingivitis or gum disease going on. It can take up to two weeks of daily flossing for your gums to stop bleeding. Healthy gums don’t bleed, so if symptoms persist be sure to see our Wyndham dentist.

Can I pull my crown or filling out by flossing?

A well-maintained filling or crown shouldn’t fall off when flossing. If it does, it is likely that it would have fallen out at another time (like during a meal.) If for any reason you feel a catch while sliding your floss up, let go of one side and pull it gently through.

How often should I really be flossing?

Once a day. If you’re not flossing, you’re not cleaning between your teeth!

Is it ok to use a floss pick?

Floss picks are generally ok for children or on front teeth in adults. Back teeth may not be accessible with some floss pick designs.

What is water flossing?

Water flossers use pressurized streams of water to rigorously flush gum pockets and between teeth. It is a suitable alternative to conventional flossing.

Can I use a mouthwash instead of flossing?

No. Rinsing may seem effective, but it doesn’t reach deep under gums or physically pull heavy plaque residue off of your teeth.

Schedule a checkup and cleaning at Wyndham Dental every six months to check areas that might be missed during daily flossing. Call now!